Share your carrot, comrade! We're all in this together. How come you got carrot and I got none? Not fair, give it up!

Biting, pushing, rubbing, flat out tanking the carrot holder - anything goes! Expropriation of resources 'unjustly' distributed is commonplace in deer world. In fact, same for the 'justly' distributed. It's like 'I've finished mine, now I also want yours!'

That is why we try to feed out carrots in large enough quantities and cut into easily chewable bits, because that enables most deer to grab a few bits and eat them simultaneously with fellow herd members. If you feed smaller quantities higher ranking members will likely get most of them, if you feed big carrots then whoever chews their own faster will have nothing else to do but stalk and bully the slower chewers.

Such is deer life.

Sometimes though, a bigger carrot is missed and 'released' into the herd by mistake, or our fingers get a bit sore from chopping loads of them, and then situations like the one on the video take place.

Deer posses an acute sense of smell, so sooner or later they spot the lucky chewer and may or may not attack or annoy them, depending largely on their status in relation to the fellow deer in question. In this particular case, we see one red tag hind getting bothered by another red tag hind (Cricket, #2194), which in our case usually means they were born same year. So they're likely in 'horizontal' relationships, so to say, quite equal in between themselves. Fawns born same year usually end up hanging out a lot with each other, they know each other quite well.

In the end, - spoiler alert - when the deer miss #2723 Red is implicitly about to be attacked by another hind [ Big Mama ] - that's a bit of a 'lie by omission' :) Because she doesn't dare to bug her much. This is one of the eldest hinds on the farm, poor girl is not in a position any more to compete with the youngsters full of life, she just carries on sniffing and ends up picking up whatever falls out of Red's mouth (yuck, we know). But don't worry, she's getting lots of attention from us with regards to her respectable age, and an extra bit of carrot and bread here and there. Unfortunately, doesn't seem to translate into her growing fat any more. Older hinds are, well, like us humans, in a way, they get pretty 'dry' and bony as they age. ((

As a bonus to our website visitors, we're publishing the real end of the story only here:

Unlisted video: how it really ended

So Red never shared her carrot, and she was never actually getting bothered by the last hind in the video) 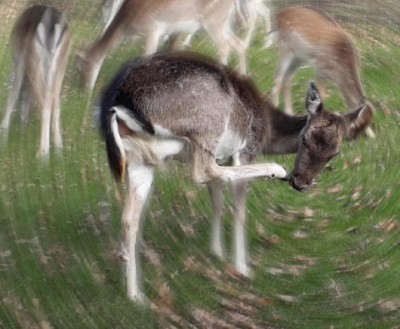 Today, deer were eating pasta for the first time. Well, to be fair, they might've tried a bit a couple times before, but only some of them, it wasn't something we'd cook for them. Until this day. The spaghetti day!
read more... 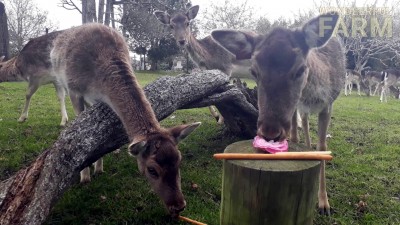