We've previously mentioned in our post on how to protect trees from deer that dogs are thought to deter and repel deer from accessing your backyard. It's true, but carries its risks.

Many have also seen the story of Fenton the dog in Richmond Park.

Here's our own very short footage of how even a small dog can scare a herd of deer to bits.

The video is so short because we had to intervene and chase our neighbours' dog away from the farm.
Interestingly, deer first tried to spook the feisty beast by ganging up on the cheeky intruder, but very soon gave in to fear once their bluff was called.

Such encounters may look funny but can be dangerous for both deer and dogs.

Are deer dangerous to dogs?

Deer prefer to flee in most cases, but in some they may also choose to attack. This is more likely to be the outcome in rut , when a doe is close to or has just delivered a fawn,or when the animal is feeling cornered. Desperate deer can severely injure or kill a dog. Some people find it hard to imagine that a small or medium sized deer can be a powerful animal but they are. We've had to carry newborn fawns to their mothers and already the babies can resist being picked up impressively well. An adult buck or doe has not only muscular legs but sharp hoves at the end. Doe once gently stepped on my bare foot with that thing and I felt that immediately. Imagine the blow of those hoves in an attack mode!

There are enough of heartbreaking reports with pictures and videos of deer attacks on dogs - or humans! We won't be posting them here not to further upset our readers. Just know that deer can be aggressive and they are capable of causing harm.

We have a dog as well but he's not allowed unsupervised visits on the farm. Even though deer watched him grow and tolerate him well, they're not fans and during the abovementioned heated periods they become visibly more aggressive. If they're let in on the same lawn where the dog is quietly lying on the grass they'd sometimes start approaching him from the back, looking stressed. Or launching at him, stomping. All not friendly gestures at all.

A panicking deer is also a danger to itself.

When these animals feel they're about to be trapped or caught, they may violently throw themselves at obstacles (fences, doors, walls) trying to get away, looking like they're trying to enter Hogwarts:

Unfortunately, this can result in them sadly breaking their necks and dying.

So keep your pets safe and don't let them interact with feral deer especially in (semi-)confined spaces or during deer mating or fawning seasons.

And to lighten the air again, let's watch a rather funny deer fight that ends well:

In fact, we have this footage of a funny deer fight on our farm: 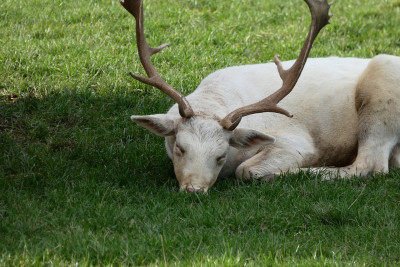 When do deer sleep?

Are deer nocturnal or crepuscular? What time of day are deer most active and when do they sleep? Where do deer bed and how they take naps?
read more...