Most mothers tell children not to “gobble” their food.

“Chew your food well”, “don't gobble” - said moms all over the world.

Well, not deer moms. They must tell their fawns the exact opposite.

“Gobble it up!”
“Just swallow it, there'll be plenty of time to chew it over!”

Because that's what deer do when they find food, especially when there's competition around - they stuff their mouths as full of it as possible, as fast as they can.

The funniest thing is that you can actually see it go down their throats.

Watch Junkie on this funny gif below [might have to give it some time to fully load]:

So you can see food go down their throats... And up again!

Did you know - eeew warning - that deer regurgitated and chewed their cud again? Well, now you do. Deer use some parts of their 4-chambered stomach to gather a lot of food at once and then sit down and ruminate it later.

In the following 30 seconds video you can easily notice that the doe sits down having nothing in her mouth only to 'send up' some cud and start chewing it.

Here's another video of cud chewing, this time featuring Blackie:

Such is deer life. Another day, another chew. Very chill. Almost zen, eh?)

But appearances can be deceiving, even peaceful looking deer can push around, bite and attack each other. But we'll save that for a whole new story.

Meanwhile, if you're curious about deer, you might want to check out our deer facts post and then maybe take a quiz?

Mammals that eat a lot of grass, or other relatively low-quality vegetation, have to process their food thoroughly to extract the maximum amount of nutrition. This is achieved by fermenting it in a specialized stomach prior to digestion.
For this reason, ruminant stomachs have 4 chambers: the rumen, the reticulum, the omasum and the abomasum. The rumen, also known as a paunch, is the largest section where helpful microorganisms cause fermentation. 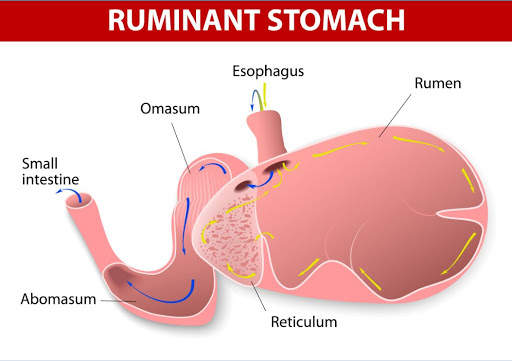 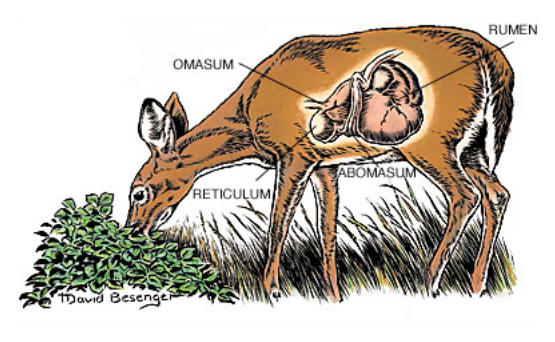 Depending on the type and abundance of food, deer can fill their stomachs in about 1 or 2 hours. Afterwards, they will often lie down in a secluded place to peacefully chew their cud.
After chewing it for awhile, they re-swallow the food, which then passes into the next three compartments — the
reticulum, the omasum and finally to the true stomach, the abomasum.

According to some sources: For deer, the cud is about the size of a large lemon. A white-tailed deer chews its cud an average of 40 times while mule deer average 56 chews.

Since digestion also produces heat, rumen acts as a furnace in winter, helping to keep the animals warm.

For those interested in learning more about deer digestive system hee are some links:

Graphic! Sliced up stomach of a doe http://www.twincitiesnaturalist.com/2009/10/secret-insides-of-deer-stomach.html

Quick fact: About 150 different types of animals have multiple compartments in their stomachs, including cows, sheep, camels, yaks, deer and giraffes.

Here's another doe doing some funny chewing and sticking her tongue out: 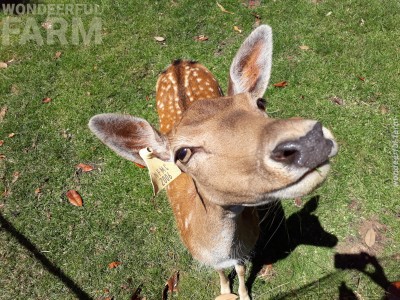 Interesting facts about deer. True stories. Deer antlers are the fastest growing tissue on Earth! They can grow at a rate of ¼ inch (0.6 cm) per day!
read more...