While deer are often seen as these angelic, peaceful creatures, they are not without a mean streak. Their social order is maintained through dominance. Democracy? Haven't heard of it. There's pecking order, status, and some are more equal than others.

Still, outright fights between hinds (AKA 'does', female deer) we almost never observe. An occasional bite here and there, a jump on the back of a mate once in a while - yep. A brawl with them stanging opposite each other 'throwing fists hooves around' - very rare, and when it does happen it only lasts a few seconds.

Males obvioulsy have more vicious fights between themselves, and they can attack females to claim priority access to food or, as it sometimes seems, just for being a jerk's sake.

But in this post we're talking hind biting. Non-lethal, pesky force displayed in the following video for your non-judgemental entertainment. No hinds were harmed in the production of this episode ))

"Starring" young hind Whitey #284 and Cricket. Also notice, in the very beginning Junkie disciplines #119 Purple. Both attacking hinds are a couple years older than their 'victims'. The interactions are filmed soon after they've all been fed some carrots.

You will notice the bites only go one way. We've never seen a deer biting back. This is likely due to the hierarchy thing. You're not being bitten unless the biter "outranks you". But that doesn't mean they have to run away and hide, oftentimes it's enough just to move a fraction. ( But not always. Looks like Cricket might've been not in the mood at all that day. )

Also, the deer getting bites from their 'superiors' may themselves bite some other herd members, to whom they are a step up 'on a ladder'.

In the next unlisted video, see poor little Whitey #284 briefly sinking her teeth into this year's fawn.

Btw, deer only have one raw of teeth at the front - on the lower jaw. Strage, eh?

Another day - another bite

Let's see, what do we have on this video? Why that's our good girl Orange biting some other good girl's ass while she's peacefully eating baleage. She's not even taking her spot, not trying to get to food the apparent 'subordinate' is picking, just sort of reminding her 'who's the boss', it seems. 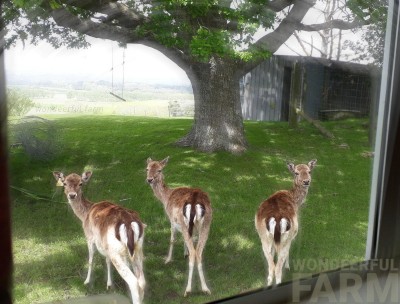